The word amateur has two meanings. One refers to the etymological origin of the word and is derived from French – amateur ‘lover of’ or from Latin – amator ‘lover’. Both come from the verb amare ‘to love’. According to this definition an amateur is a person that engages in a pursuit on an unpaid basis; one would assume – out of passion or love. One might also say that being an amateur is then quite nobilitating and can be associated with social values such as altruism. For many of us this would not be our first association when called an amateur. What we would probably have in mind is the second meaning of the word describing a person who is contemptibly inept at a particular activity, or simply incompetent or unskillful.

Ania Molenda is an independent Rotterdam-based architecture researcher / curator and founder of Amateur Cities. Her work focuses on the socio-cultural dimension of spatial practices and innovation in contemporary urban environments.

Cristina Ampatzidou is a researcher and writer with a background in Architecture and Urbanism and a founder of Amateur Cities. Currently pursuing her PhD at the University of Groningen on the topic of gaming and urban complexity, Cristina is also a regular contributor to urbanism and architecture magazines and a collaborator of the Architecture Film Festival of Rotterdam.

That’s why today we would like to stand in defence of the first meaning of the word. We would like to focus on its relation to passion, practical knowledge and economy. You might think: what on earth does this mean – amateur cities!? What is wrong with being professional? Well, the truth is – nothing, but there is also nothing wrong with being an amateur. In fact, we think there is a lot of overlooked potential in today’s amateurs and that their role will grow both today and in the future in urban environments. That’s why we would like to devote this platform to them and the ways they might be shaping cities in the near future.

Without diminishing the value and importance of expertise, here on this platform, we would like to focus the attention to the potential of amateur ‘love driven’ and aimless exploration. The kind of exploration that can be compared to the naive questions asked by a child who is trying to understand the world. These seemingly irrelevant questions can provoke unthought of perspectives. Due to their simplicity, these questions are left answered and are taken for granted. These questions might find more fertile ground on which to be addressed away from structured and goal oriented environments, that are neither academic nor business-based. Why? Because naivety is also free of all preconception and therefore has grand and innovative potential. Today, the number of unaffiliated practitioners is growing exponentially due to the Internet’s wide accessibility to knowledge. 1 [1] One of such examples is Foldit (http://fold.it/portal/) a revolutionary computer game that enables its players to contribute to important scientific research. Foldit has published a series of articles co-authored the players who managed to successfully find protein new folds.

They find expression through various activities such as: journalism (blog sphere), editing (Wikipedia), broadcasting (YouTube, Vimeo) craftsmanship (Etsy), web design (WordPress) and computing (Arduino), just to name a few. Furthermore, whole new fields of knowledge have come into being that have been triggered by available tools and from a certain amount of discontent with the current reality. A hacker, for example, can in fact be considered a professional because they have the required amount of skill and knowledge necessary to do the ‘job’. While institutional space for exploration of ideas and values not related to a particular economic growth seems to be shrinking, amateur initiatives have begun to have a more important role in introducing a new balance to this process. In our understanding today’s and future amateurs bring forward a new sense of honesty and authenticity.

This authenticity comes along with a very personal, thus subjective and engaged point of view. Why it might become so important is because the dominating ‘objectivism’ present, for instance, in the news and the omnipresent sense of globalism often tends to overshadow what is local or personal.

What is presented today as ‘objective’ often has nothing to do with real objectivism and always carries a hidden agenda. In such a context a more subjective approach can naturally be understood as more honest and genuine.

Amateurs are not something to be afraid of. Home grown knowledge will not unexpectedly flood the world negating all need for professionals and expertise. This is not the point. It is also not the point to expect that people like Albert Einstein, Charles Darwin, Gregor Mendel or Le Corbusier, who rose to fame from being amateurs, will start to appear out of nowhere and save the world. It’s more of a plea to open up and welcome the knowledge that amateurs have to offer with interest and give them perhaps a greater opportunity to explore their questions and check if they have already been answered or if they are truly novel and can offer something new and interesting to the world. 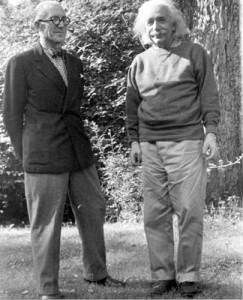 Le Corbusier, a grand master himself, describes his awkwardness when meeting Einstein at Princeton in 1946: “I had the pleasure of discussing the “Modulor” at some length with Professor Albert Einstein at Princeton. I was then passing through a period of great uncertainty and stress; I expressed myself badly, I explained the “Modulor” badly, I got bogged down in the morass of “cause and effect”… At one point, Einstein took a pencil and began to calculate. Stupidly, I interrupted him, the conversation turned to other things, the calculation remained unfinished.”

Thanks to easily accessed information everyone can now become a skilled amateur in the time it takes to go through a few youtube videos, tutorials or articles. This kind of homegrown education will certainly bring about a lot of changes to the way we will function as a society in the coming decades. In order to become an expert and possess that kind of knowledge, it previously took years of education, followed by years of practice and promoting oneself public acclaim. This path is certainly not irrelevant. Nowadays, however, it is not uncommon that children who have good access to the Internet manage to pursue research projects on an academic level. These children often receive scholarships and have access to the best available institutions to carry out their research. But there are many more people around like the children in this example who could benefit from basic or more access to academic knowledge, provided that academic knowledge is accessible. Currently, it is neither easy to find nor easy to read. It uses language that is hermetic and can be understood only by experts or by only people from the same circle. And yes, it does seem to contradict the level of hype the words ‘interdisciplinary’ and ‘participation’ have currently been receiving.

At the same time, while amateurs are being disregarded for their lack of professionalism, experts struggle with maintaining their previously unquestionable credibility. Established institutions tend to disappoint lacking a certain level of sense and integrity related to the public service they provide. For example, we can think of media providers that struggle to deliver to us truly objective and insightful information. Instead feeding us jabber that is in full support of various private or political interests. In that context some experts seem to be threatened by the rise of the amateur culture. This tension between the rise of the amateurs and the pressure faced by experts is perhaps best seen in the area of journalism. Bloggers and independent news correspondents bring a new, and for some threatening, perspective of pluralism that is not in favour of the evening news. Nowadays, the mainstream media seem to be much too concerned with the number of viewers and the revenue generated during prime time than with the true object, which is to inform the population and to look critically at those who are in charge. This focus results in opinions making the news where each subsequent item is simply more shocking and outrageous than the previous one.

True concern about insight and thorough analysis seems to have almost completely disappeared from the media. The very same analysis that the aforementioned experts could and should provide.

Without this insight we often have trouble judging what is more true or more reliable. Instead we start to believe that the most reliable piece of information is the most popular one – most read, most searched, most liked or most shared. Many professionals fear that poor quality yet popular content will soon dominate the media and kill the truly valuable one that people will no longer want to pay for. As Steven Levy said in one of his already rather dated Newsweek articles:

“If we are to lose the beneficial halo generated by professionals, experts and geniuses, it won’t be because of ankle-biting bloggers, callow Wikipedia authors and mediocre folk singers riding the long tail. It will be because the audience at large thinks that the truly good stuff isn’t worth paying for. If all goes well, new business models will make it easier for excellence to be rewarded. In any case, we will ultimately get the media that we deserve.” 2 [2]source: Invasion of the Web Amateurs. By: Levy, Steven, Newsweek, 00289604, 03/26/2007, Vol. 149, Issue 13

It is exactly for that reason that Amateur Cities wants to communicate in a way that might not reach the highest popularity. It will not have endless ‘scroll downs’ of flashy renderings, but it will publish articles about cities and processes taking place in the urban environment. The reason we want to do this is because we see that what is currently happening in the media is also happening in cities. Urbanism becomes rather stagnant and dominated by corporate interests. Cities grow beyond it and they are built by amateurs. This is not only in slums and shanty towns, also online by hackers and gamers, by NGOs and activists, by neighbours and many other communities that are not institutionalized or commercialized. They are done by amateurs and emerge from passion and discontent, and as Robert Park says, from their ‘heart’s desire’ to shape their living environment. See also:

Jim Brown, Cage Free? What are the implications of the spirit of late capitalism if it blends work and play, labour and leisure, especially given that this blending happens not only in terms of time but also in terms of space?

There is no doubt that in the years to come the urban population will grow, there is also no doubt that Internet will continue to provide wider and cheap access to knowledge and information, that larger groups of citizens will be educated and technology will be enabled in even wider areas of the world, and that last but not least, the current bureaucracy and level of institutionalization will not change drastically. Amateurs will thus grow in number and importance. We think they have a valuable role in shaping the future of cities. Their input and engagement will probably increase and has a big chance to complement the one of the areas expertise without replacing it. We hope that the two will eventually be of equal importance, but because it is not very clear today what their particular roles will be and what this relationship will look like, the shaping of this relationship requires more research now. And this is what Amateur Cities will be doing.